Izu-shi is located in the centre of the Izu Peninsula in Shizuoka Prefecture, about 100 km south-west of Tokyo.
Nelson’s sister city is a rural, mountainous, and forested community of 32,000 people with stunning views of Mount Fuji and Suruga Bay
Izu-shi is famous for its hot springs, its mountains, golf courses, hiking, cycling, cherry blossoms, summer festivals, and agricultural products like wasabi, shitake mushrooms, and tea.  The area is also noted for its excellent local sake and craft beer.

People in Japan have long come to the area to enjoy soaking in the onsen hot springs in Shuzenji and to enjoy the early cherry blossoms that arrive on the mild Pacific coastline of the Izu Peninsula. Izu-shi is the setting for the short story The Izu Dancer by Nobel Prize winning author Yasunari Kawabata.

Our sister city is the host city and venue for two cycling events for the 2020 Tokyo Olympics and Paralympics and a popular mountain biking destination.
​
For more information about Izu City and the region, click here 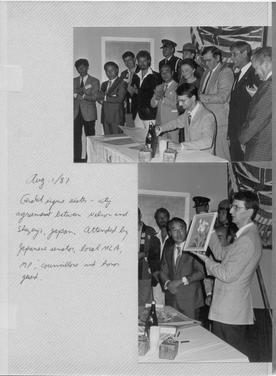